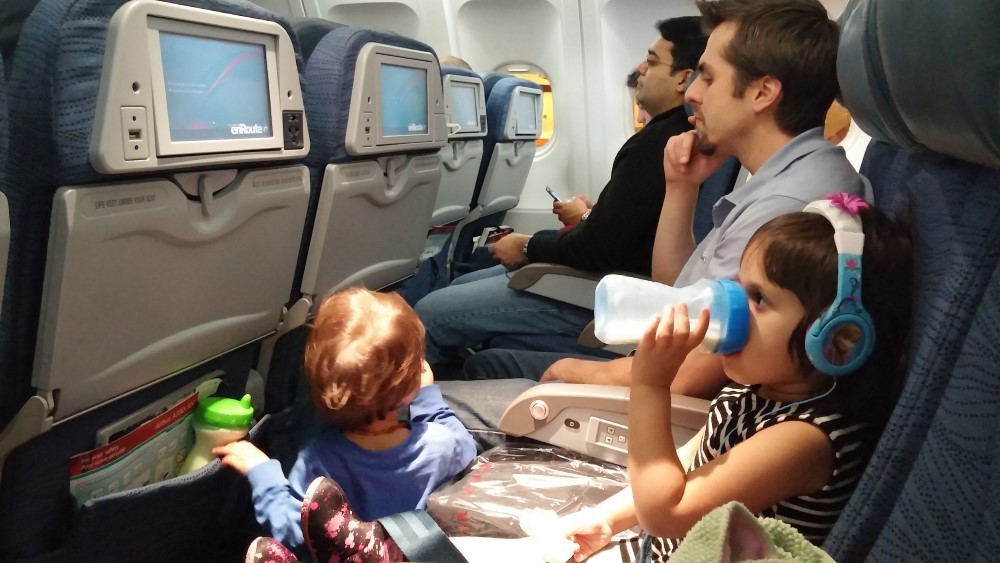 Loading...
As a flight attendant for thirteen years with two companies, I learned a lot about traveling with babies by just watching what worked and what didn’t with passengers, but the real lesson was ahead of me. Now I’m usually flying alone with my own three between Europe, where I now live, and California, where I’m originally from about every six months. We’ve also taken quite a few flights within Europe, the Middle East and domestic flights in the States. I’ve actually lost count of how many, and now we can claim we’ve done stand-by, full fare, low-cost, charter, etc.
Some of this information might seem obvious to you, especially if you’ve flown a few times either with or without your children. Some reading this have never been on a plane themselves, or it’s been long time ago, so please keep this in mind.
Also, to be clear, this article is not a legal document and can’t be used as proof of any of the laws or rules I refer to throughout. Check the FAA websites or other relevant agencies to confirm any statements I make. I try to provide links when I can. Be aware, also, that airlines often have their own policies which might be stricter than their own governments’ laws. Most of the employees you encounter do not have the power to change or make exceptions to any rule. They simply must follow them, even in cases where logic or safety is questionable. Now that I’ve covered my backside…
Flying with babies? For me, it’s definitely a means to an end. I loved my job. I love traveling, but actually flying in the plane with my little ones, I just try to get through it as smoothly as possible. If it helps, calculate how much of your total trip will actually be spent on the plane. A mom flying halfway around the world wrote me to tell me it helped to think of it that way. Even for a short visit, the actual proportion of the time spent in the airplane and airports will be short.
One of the worst mistakes to make is to assume that the last time you flew, everything went great so it will again. Also, how much your little one(s) have flown has little or no impact on how it will go the next time. Not too many kids have flown as much as mine have, and I’ve stopped predicting whether they’ll have horns or halos during the flight, while children who have never been on a plane can be complete angels. It’s variable. Pint-sized memories are short. The purpose here is to keep make it as easy as possible. I usually expect that everything will go wrong. If any mishaps occur, well, stuff happens. That’s a given. If everything goes smoothly, I quietly celebrate my victory…
I have tried to organize this article in sections so that parents can skip over and get to the parts that are relevant. For example, if you already have your tickets booked, you can pass over all the sections on buying tickets. It can also be a bit much reading all this in one sitting so parents have told me that they find it helpful to bookmark or copy it, coming back to the sections they need as they come up.

These (often) new companies are making air travel more affordable, but some of the rules are slightly different than flying with regular companies.
First of all, they often fly into really remote airports. In fact, objections have been raised over what cities they supposedly serve and even ended up in court. Some airlines even list their airports by different cities than for which they were originally named, for example, one company claims to fly to “Barcelona” when it is really Girona, quite a distance away. Occasionally, they actually use a more convenient airport or perhaps they land closer to where you’re headed but find out exactly in which airport they use. Do not simply go by the city on their list.
I recommend never mixing same-day travel between low-cost and “mainstream” companies. Low-Cost’s often don’t have agreements with other airlines (another cost-cutting measure) and there are other complications with totally separate reservations, including using different airports and having to transfer and check in again even if staying at the same airport.
One way they sell tickets cheaper is that they don’t always handle connections. Check to be sure but tickets are often sold “point to point”. This means you arrive at the connection point, you get your bags, pass through arrivals and head for initial check-in and do it all over again, even though it’s the same airline. I’ve done this and managed it alone with three children. It wasn’t actually that terrible but I was very lucky that nothing went wrong on the first flight. It’s usually obvious when you book that you’re buying two separate tickets so this shouldn’t come as an ugly surprise.
For the record, the company itself will probably advise against this. We were once on a very delayed flight. A family waiting with us, lost their next flight entirely, since they had another ticket for the same day. The airline offered no compensation and were very unsympathetic.
If they offer “priority boarding” at a cost, it’s a good idea with children. Ask but they probably don’t pre-board families at all or board them after those who paid to get on first. This “priority boarding” is usually not expensive but a silly thing to actually pay for. We end up simply getting on the first bus out to the aircraft. With open seating, you might have to really fight to seat the family together. One experience doing that convinced me that the small fee per person was well spent to get on slightly ahead of the rest. This is especially important for a parent flying alone with more than one child.
Find out if you can simply board earlier by using the on-line check-in service, if offered. Read about boarding on your airline’s website because this process can be very different than what you’re used to and policies can change from the last time you flew with them.
Some Low-Cost airlines do offer reserved seats, again, if you pay a fee. I recommend paying this fee too, unless the flight is completely empty (a fact you may not be able to check). The problem is that if your family is split up, you may be in a position where you are asking other people to move to accommodate you. They may have paid for their reservation and are now inconveniencing them because you didn’t.
Check that there are no restrictions to flying with more than one child under age 2. At least one foreign airline does not allow one adult to fly with two under-age two children since seats cannot be purchased for them.
Low-cost companies in most countries usually don’t serve meals and when they do, they’re overpriced, limited and usually not the best quality. Meanwhile, you are often welcome to bring a whole picnic on board if you want. In the terminals where Low-Cost companies fly, often there are plenty of food stands which are conveniently placed by the boarding area, after the security points. So head for your gate as soon as you can and stock up for you and your kids. If you bring food from home, most security companies are more concerned with drinks and will allow most food through. Show the security agents directly any item that you have questions about and if not allowed, it will simply be taken away.
Be very aware of checked bags. It’s usually cheaper to pay for your luggage ahead of time. It might be better to over-estimate your number of bags because if you add one later, or worse, show up at the airport with more, this might mean paying a steep fee. Extra baggage at the airport might mean waiting in another line and dragging out the check-in process. When you fly with kids, do everything possible to keep check-in smooth and quick.
But before booking, do the math. The cost of transport to an out-of-the-way airport, especially early in the morning, might not be worth it. Remember, if there is a delay, you may not be switched to another flight on another airline since they are usually not members of alliances. You have to wait until your specific flight is ready. Also, if you arrive in the evening, you might end up paying for a hotel an extra night, which you wouldn’t if you took an earlier scheduled flight. Again, another cost-cutting measure is taking flight slots at odd times, perhaps late in the evening. The cost of checking bags is also pretty heafty with some companies.
Sometimes saving money is not actually saving much and your sanity is worth a price too.