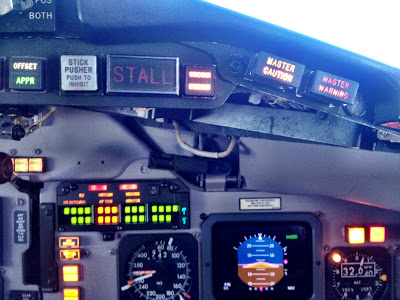 The Captain was working the radios and I was at the controls as we took off from runway 18L on our way to Mexico City for what was supposed to be a simple two leg turn. We had a full load of passengers and a heavy load of fuel in anticipation of poor destination weather, so the aircraft was well above max landing weight as we roared into the afternoon sky. 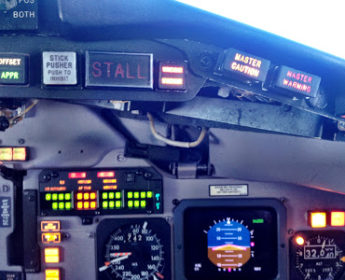 The first 10 minutes of this short international flight passed as so many do…boring and uneventful, just like I like them. But as we climbed through Flight Level 230, an amber MASTER CAUTION light illuminated on the glare shield. This light is designed to catch the pilot’s attention and directs him to an annunciator panel for more information about an abnormal condition. Situated above the windshield and below the overhead panel, the annunciator panel is usually blank at this stage of the flight, so the OIL STRAINER CLOGGING light stood out like a sore thumb.

MD83 Annunciator Panel as it normally looks during flight… dark, no lights

This was a light I had seen before…on more than one occasion actually, but never in the real airplane. The OIL STRAINER CLOGGING light was the abnormality, pre-programmed into the simulator by my instructor, that led to more than one divert during yearly visits to recurrent training. This time it was real and although I called for the emergency checklist, I knew what was coming.

We were in communication with Houston Center at the time and the captain requested a level off at FL240 because he knew what was coming too. Following the checklist, I turned the auto throttle off and added pressure to the left rudder pedal as I pulled the throttle back on the right engine. I held pressure on the rudder instead of adding trim because I knew we would start down in a few moments and would have both engines at idle, negating the need for trim.

The warning light remained illuminated, but all other engine parameters appeared normal…oil temperature, pressure and quantity normal…EGT normal…N1 and N2 normal. We would not have to shut down the engine. It’s much better to leave an engine running at idle if at all possible. At idle, the engine does not provide enough thrust to be of any use, but it does provide air and electricity and is there standing by to produce thrust if the pilots really need it.

I have declared an emergency on numerous occasions over the years and have always received prompt and helpful service from Air Traffic Control. This day was not different. I pushed the throttle up on the good engine in an attempt to control speed and asked the Captain to request a lower altitude. Given the heat of summer and our heavier than normal weight, we weren’t going to be able to maintain FL240. The Captain declared an emergency and requested an immediate descent and a turn back toward the airport. We were cleared to descend at our discretion to FL180, an altitude we could maintain on one engine, and were cleared directly to the airport. We were now headed the wrong way on a heavily traveled departure corridor from one of the busiest airports in the nation, but ATC cleared the path for a straight in arrival.

After completing the checklists, the captain was busy keeping the Flight Attendants in the loop, making PA announcements to concerned passengers and coordinating our arrival back at the airport. He delegated flying the airplane and working the radios to me, and I remember making a conscious decision to make the arrival as normal as possible. By keeping the profile normal, I hoped to highlight anything that was not.

As we descended with both engines at idle power, there was no differential thrust so the airplane flew as it normally does. We were approaching the airport from the south and the summer winds were blowing hard out of the same direction, so I planned to fly normal downwind and base legs and planned to pass abeam the departure end of the runway at 8,000 feet so I could make a power off descent to the final approach course. We had the airport in sight from 20 miles away and were cleared for a visual approach to runway 18R. We could have had any runway we wanted, but 18R was the normal runway, so we stuck with normal. We started our turn from the downwind leg back toward the airport as we passed through about 4,000 feet and I didn’t have to add power until we were almost over the final approach fix.

I slowed the aircraft and configured for landing as I would for any other flight with the exception of the flap setting. I typically landed the MD80 with flaps 40, but the single-engine approach and landing checklist required the use of flaps 28, which reduced thrust needed during the approach and improved climb performance in the unlikely event of a single engine go-around.

At about 1,200 feet above touch down, I increased the power one last time on the good engine and stabilized our approach speed. I’m not embarrassed to admit that the last 1,000 feet of that approach got my blood pressure up. We were over the max landing weight by almost 10,000 pounds and flying on one engine. I had successfully flown this approach on one engine many times and in much worse weather conditions…but always in the relative security of a flight simulator and always with the knowledge that we had a redo button in case I screwed it up. This time it was for real. The approach needed to be perfect…and since we were overweight, the touchdown needed to be smoother than normal to avoid damage to the aircraft.

I set the main gear smoothly onto the runway, lowered the nose until the wheel touched and raised the reverse thrust levers as I applied the brakes. I didn’t use any reverse thrust on the bad engine, but even at idle, deploying the reverser would help slow the aircraft. We slowed to taxi speed on the runway and leisurely took the last high speed turnoff from the runway where the “safety vehicles” were waiting for our arrival. An hour later we were climbing through FL240 for the second time that day, but with slightly more productive results. On to our destination and back again, I was home within two hours of when my wife was expecting me. I don’t think she even noticed.